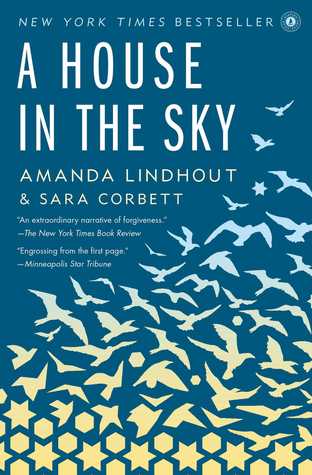 Book Review: A House in the Sky

By Amanda Lindhout and Sara Corbett

“I cannot love this book,” I said to my husband, “I don’t know if I can keep it on my shelf.” His surprise was evident. I can’t love this book is because I spent a lot of the time reading with my hand over my mouth and tears in my eyes. I cried big hot tears for the depravity of what humans can do to each other. But, I couldn’t stop reading it. I had to know that Amanda made it. You’d think it was obvious, since she co-wrote the book, that she survived. But, perhaps, Sara Corbett could have written the book using Lindhout’s recovered notebooks. As it is, I’m still unsure of what role Sara Corbett played, in writing this book, but it’s really neither here nor there for me.

From the beginning, I enjoyed the writing itself. It’s well written and polished. The authors’ ability to bring the reader into a country and show it to them is one of the outstanding things about A House in the Sky. Throughout this story, whether you are in Caracas or Bangladesh, India or Pakistan, you are presented with descriptions as vivid as the National Geographic magazine pictures Lindhout studied as a young person. She says herself,

“For five months, we’d sat with Roraima on our coffee table in our little apartment in Calgary, its pie-wedge shape occupying the pages of our most treasured issue of National Geographic. And now the looking glass had flipped. We were like fantasy characters climbing around a picture that had gone three-dimensional. “

By the ninetieth page, Lindhout’s nostalgic recounting of these travels, left me with a yen to travel myself. She evokes a sense of place so clearly, it’s like travelling without moving your feet.

In my opinion, her trip to Afghanistan was a foreshadowing of what was to come. As she plans to leave for Kabul, a women is kidnapped, her parents plead with her not to go but, she goes anyway. The scene in the marketplace that has her leave the country saying “Don’t f*** with Afghanistan” is only a precursor to what happens to her later. I’m not sure travelling there alone was the best idea. I know, as Lindhout point’s out, people miss out on experiencing a lot of the world’s beauty because of the fear and limited knowledge of the countries themselves. Obviously, she didn’t want that to be true for her. Childhood for her was chaotic and unpredictable and violent so, to some extent the moments she experienced this while traveling didn’t phase her all that much. I, however, don’t think I could travel to places that are riddle with war and strife and kidnappings. My very planned and family guided trip in England still had me stressed at times. But then, the Toronto airport was too peopley for me. Even when my best friend and I traveled to Mexico, after our first year of teaching, we did as we were told: 1) Only travel with the resort tours and in approved areas and 2) Don’t go anywhere alone. I wasn’t about to argue. I’m sure there are parts of Mexico we didn’t see. I did love being at the ruins of Chichen Itza and Coba, the white beach of Tulum, and snorkeling in a cenotye. I can’t identify with her adventurousness in the face of danger and uncertainty but I respect it.

Lindhout’s travel bug leads her to Africa and into Somalia, one of the most dangerous places on earth. I remember the news featuring stories from Somalia when I was about fourteen or fifteen and about the interventions taking place there by UN Peacekeepers from Canada and the peacekeeping missions of the United States. I saw Captain Phillips and watched my husband struggle with the content as much as I did. I know that it is not now or ever likely to be a place I’d want to go. But, she does. Not just to see the world but to help make it a better place. She goes as a freelance journalist and her friend Nigel goes with her. In less than a week, they are kidnapped by bandits. Her writing shifts for nostalgic recollections and descriptions to polished, exact prose. She details the conditions of their imprisonment, the food, their captors. Lindhout comments on how small her world had suddenly become. Which aside from reminding me of Emma Donoghue’s Room, made me feel empathy for this country-hopping woman who was now confined to a disgusting molded-covered room.

As the months tick by, Nigel and Amanda find ways to occupy themselves, comfort each other, and try to survive. Not to diminish Nigel’s experience in anyway, but Amanda’s treatment was heinous. I spent those pages sick with sadness and I cried many times. There were times I had to close the book and breath so the tension and apprehension I was feeling could dissipate. Moments of reprieve were there when they shared pleasant interactions with their captors and talked about their future plans. At one point, Amanda begins lapping the room to keep her body busy and fill the time. Around and around she goes, faster and faster, until there is a track on the floor. This scene reminded me of The Yellow Wallpaper by Charlotte Perkins Gilman when the protagonist descends into madness as she crawls circuits around the yellow papered room. But, for Amanda, it gave her a routine and much needed movement. Inevitably, her treatment gets worse as the captors become more desperate for money to fund the jihad and support themselves.

In moments of extreme anguish, Amanda builds a house in the sky that she can retreat to in her mind. The lyrical description pulls you away just enough to get you through reading about what Amanda is experiencing. It was horrible, I’m tearing up thinking about it. Whenever she is beaten and raped, she retreats to this house she’s made. She climbs it’s staircases, enters it’s bright, clean rooms with gorgeous windows, and fresh breezes. She continues adding houses and eventually there is a “sparkling city near the ocean” where she can be free. Amanda hears a voice telling her,

“See? You are okay, Amanda. It’s only your body that’s suffering, and you are not your body. The rest of you is fine.”

At various stages of her captivity, Amanda talks to herself, coaches herself and Nigel, and she focuses on keeping her mind clear and set on doing whatever it takes to survive. I struggle to comprehend that kind of strength, and fortitude. I was impressed by her ability to read her situation and the strategies or tactics she used to survive. Doubtless, Amanda and Nigel needed each other. They both accepted that one or the other of them might not make it, and that that individual needed to do what they could to get free. There was no real hate or anger in that. It was just a fact. As soon as you come to terms with a new normal for Nigel and Amanda, everything changes.

The book begins to draw to a close. Everything degenerates. I kept reading. I can’t explain it, really. Part of me needed to see her rescued. For me, Nigel had faded from focus, Amanda was the one I cared most about. I read on past my bedtime in order to finish the book in a second sitting. With the startling rapidity of ten pages, Amanda and Nigel are released, recovering in the hospital in Nairobi, and planning to return home. Perhaps, the only disappointing part of this narrative was the short choppy explanation of how the rescue operation happened. I wanted to know more about it but, perhaps, that’s another story as they say. More than likely, it is written this way because information about the rescue is fragmented across countries, agencies, recounts, and the need to protect certain pieces of information about the process, like how groups like the AKE, the agency that was able to free Amanda and Nigel, operate. With Amanda and Nigel safely back with their families, I could go to sleep.

The next morning, I was telling my husband about what I read the night before. “Why did she write this book?” I wondered out loud. I mean, it’s awful. Sure, there are moments of beauty, excitement, humour, and bitter irony. But, it is still awful. I sat there, answering my own question. She wrote it to help herself heal from and understand her experience. She wrote it because sharing makes the burden lighter. I think she told this story because she saw good in the world and in some of her captors, where and when you’d least expect it. This story needed to be told to help people understand what is really happening in countries around the world when we read little the lines of text on the bottom of a news broadcast screen. Her story shows the world bravery, compassion, self-forgiveness, and survival in the worse possible conditions.

At the beginning of this review, I said, “I can’t love this book.” Let me explain. It seems wrong to say you love a book where there is so much hurt, pain, and ugliness that happens. It feels strange and uncomfortable for me to say, “I loved it!” or “I enjoyed it.” They feel like inappropriate expressions to use, given the content. At the same time, there is the compassion that the woman in the mosque shows for Amanda. At one point, Amanda, despite everything one of the captors does to her, realizes and understands what made him into this person, who is capable of such acts. Throughout the book, there are little moments of pleasure and humour but, they are short and few in number. Having said all this, it is an amazing story, and it’s incredibly well written. The images of faraway places, the beauty, and the pain depicted in A House in the Sky will stay with me forever. I am certain that I’ll recommend it others. I know I’ll be raving about it to any reader that will listen. And, I can’t wait to discuss it at book club. I gave it five stars on Goodreads, for goodness sake. I just struggle with saying I loved it.